After checking in to Las Almenas, we decided to take a bus to the Albayzin. An old man at the bus-stop started to chat with us. We couldn't understand a word but I managed to make out that he lived in Albaycin. He was trying very hard to be understood. I produced a map to show him where we were heading. He said his eyesight was bad. 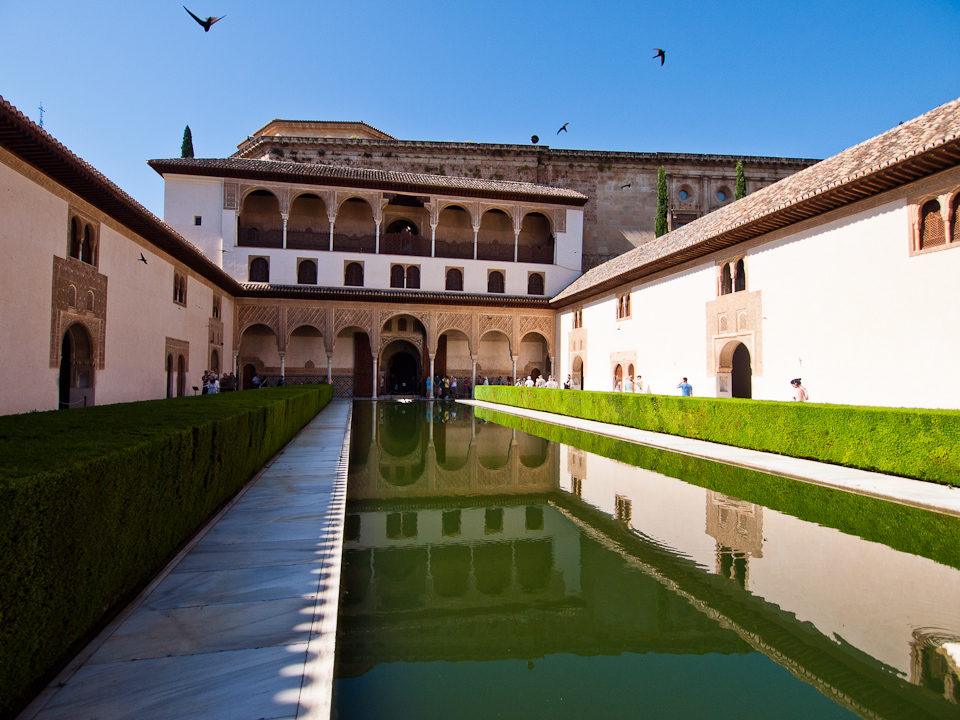 Me: We are going to the Mirador San Nicholas.
Man: ...mirador?
Me: Mirador - si, mirador!

Both he and I then started using the word 'mirador' a lot as he attempted to give instructions on how to get to the viewing point.

On the bus No. 7, I asked him how long it would take. He didn't understand. I pointed to my wrist. He lifted ten fingers.

Relying on his iPad again, WK nearly got us off at the wrong stop, but the old man gestured that it should be the next one.

We got off and the man walked with us part of the way, repeating, "Una place, Uno alco", then pointed to indicate a turn. As he said 'alco', he used his hands to trace out a hole. He then asked how long we were staying, pointing to his wrist.

I struggled to get out a 'dos dias'. We said our goodbyes as he came to a turning to his home. WK was fascinated that the man and I could even have a conversation.

We walked up the hill and on reaching a small tunnel, it suddenly hit us: 'alco' must mean 'alcove'! Later, I would discover that he could also have been saying 'arco' (meaning 'arch').

Finally, we were at Mirador San Nicholas, where there was a clear view of the Alhambra. I think D enjoyed it, especially since we managed to get beers while waiting for the sun to set.

The next day we did a tour of the Alhambra. WK's camera battery had died, so he started walking around taking pictures with his iPad. It looked a little ridiculous, and we kept making fun of him, but the pictures turned out pretty good.

Myriad uses of the iPad

D had brought the iPad to London for WK from Singapore, where it was cheaper to buy one. WK could not stop singing its praises. According to him, the iPad could be used, among other things:

Sitting at an open-air cafe, we consumed some passable food. A scruffy looking man came to our table, holding up a cardboard sign. He pointed to the words on the card and mumbled something, then put the card down. We thought he was a beggar and asked him to leave. He picked the card up and started to walk away. WK immediately sat up and grabbed the man's hand. Turning the hand over, he revealed that the man had taken D's phone. WK was now the hero of our group.

Tired, we went back to our hotel for a shower and some rest. This turned out to be a good move, as one by one, we were starting to catch a bug - first D, now HC. WK and I were to get it later. It was the bug from Singapore.

Turning to the question of our dinner plans, WK said, "Let me ask the god of the internet to confer me the knowledge of where to eat." Needless to say, his medium was the iPad.