It was raining in the morning so we took our time getting to Skaftafell National Park where we'd planned to hike. When the rain stopped, we agreed to do the two- to three-hour route towards Sjonanipar, then to Svartifoss and back. LK had the Lonely Planet to help but it was LS who charged ahead, setting a brisk pace. I tried my best to keep up. B and LK lagged behind initially, taking pictures as they walked. It started to rain again, and then it would stop for a while and start again. Each time I put my rain gear on and kept my camera in the bag the rain would stop. As soon as I took my rain coat off or got my camera out, it would start to rain. The cheap rain coat was useless. It did keep me dry on the outside but I was drenched through from the condensation inside. 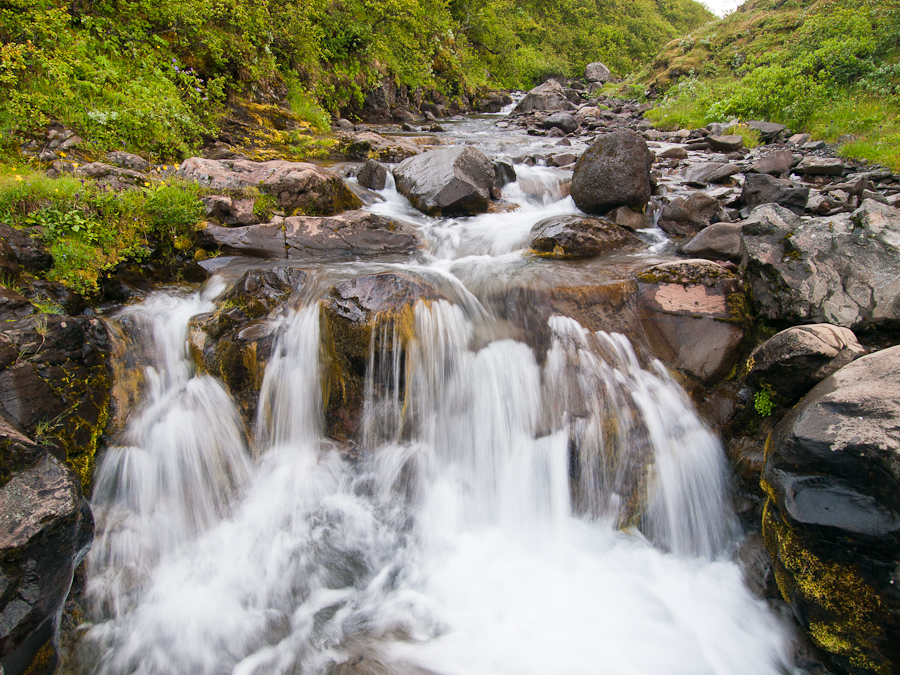 Lost in the rain

We reach Sjonanipar, and continued walking through some muddy patches, getting our socks wet. After an hour or so and having just climbed up a steep slope, we passed some other walkers coming from the opposite direction. I asked if they'd come from the waterfall.

Walkers: What waterfall?
Me: We're supposed to be heading towards a waterfall.
Walkers: That's five or six hours away.

Without knowing it, we had joined the seven-hour route. LS was already far ahead of us and we had to shout for her to come back. Retracing our steps, LS and I sped back towards Sjonanipar, overtaking the two walkers who'd helped us with directions. Near the muddy bit, we decided to pick up a rock each to 'pave' a path but it didn't work as the rocks were too small and sank the moment we put our weight on them. Moving on, we found some large rocks. I thought we'd carry one back to the muddy area to make it easier for B and LK to cross. LS did likewise. The rock I carried was very heavy.

LK's shoes had been giving her trouble throughout the trip from Day One, and now a left sole was starting to flap away. It soon came off completely.

Eventually we came to the waterfall. Actually, we passed three, each time thinking that the one we'd just seen was the real Svartifoss.

It was nearly 10pm when we got in the car. Turning the engine on, LS noticed that the tire pressure warning had come on again. We'd been having this problem since Landmannalaugar and had inflated the tyres several times. We inspected them again. The front left tyre appeared to have been deflated slightly. We decided to change it using the spare.

It took us a while to figure out where the jack was. We had instructions for getting the spare out but couldn't find the 'access hole' to stick the wrench into. There was a hole in the rear bumper, which both LS and I reckoned was for locking the boot. B suggested we drive to the Shell station on the way back to inflate the faulty tyre and perhaps get help replacing it with the spare. It was now 10.21pm. We had planned to get back to Hofn by 10pm so that B could try the langoustines she had missed out on. Too late.

At the Shell station, two truck drivers helped us to locate the access hole, which was in fact the one LS and I had identified as the lock for the boot. With this sorted, we set about changing the tyre, which went rather smoothly. This was the first time I'd changed a tyre.

B and LK asked in the shop what time they stopped serving food, but the people in it were kind enough to keep it open for us, as long as we could make it before 11.30pm. They normally closed the food counter at 10pm. For 1,250 ISK (about £6), we got an all-you-can-eat selection of soup, lamb stew, fish gratin, rice, potatoes, peas, coleslaw and pudding. The lamb was very good. The soup was a little salty. Overall, the meal was very good value, considering we'd been spending £35 on average for our dinners.

At a quarter to midnight, one of the shop staff got very excited over a phone call. We only caught the words "Michael Jackson" and "Oh my god!" Another lady told us that Michael Jackson had died. We couldn't believe it. They put Teletext on the television but it was all in Icelandic. The lady confirmed that the news was true. LS and B were upset by the news: they had bought tickets to his concert in September. "Oh my god," LS kept saying.

The lady who translated for us said, "I hope you get your money back."

Nothing we can do

We drove the long drive back to the guest house. LS was careful to keep the speed at 80kmh, as advised by the car manual when dissimilar-sized spare tyres are used. She didn't have to try hard as it was dark and raining and birds were flying all over the place.

Back at the guest house, LS was inspecting the car tyre when...

I kicked the bird off the bumper.

LS: Oh no.
Me: It's only a bird.
B: Ya. Lonely Planet said that if you ask a bus driver, they'll tell you, "Stop for sheep, never birds. Never stop for birds."
Me: You can't do anything about it now. It's already dead.
B: Ya.
Me: Just like Michael Jackson.
B: Ya, but we didn't kill Michael Jackson.

For some reason that got everyone laughing. It had been a long day.