An Australian lady came in to our cabin to pitch her hotel in Luxor. She said that the place was clean, the toilets flushed and you could throw anything in them. According to her, the Egyptian men in Luxor didn't like a woman running a hotel and so deliberately misled Boomerang Hotel guests by giving them the wrong directions. Unfortunately, we did not need accommodation in Luxor as we would be on the cruise, which we would be boarding at Aswan. She told us that Aswan was another three and a half hours away. 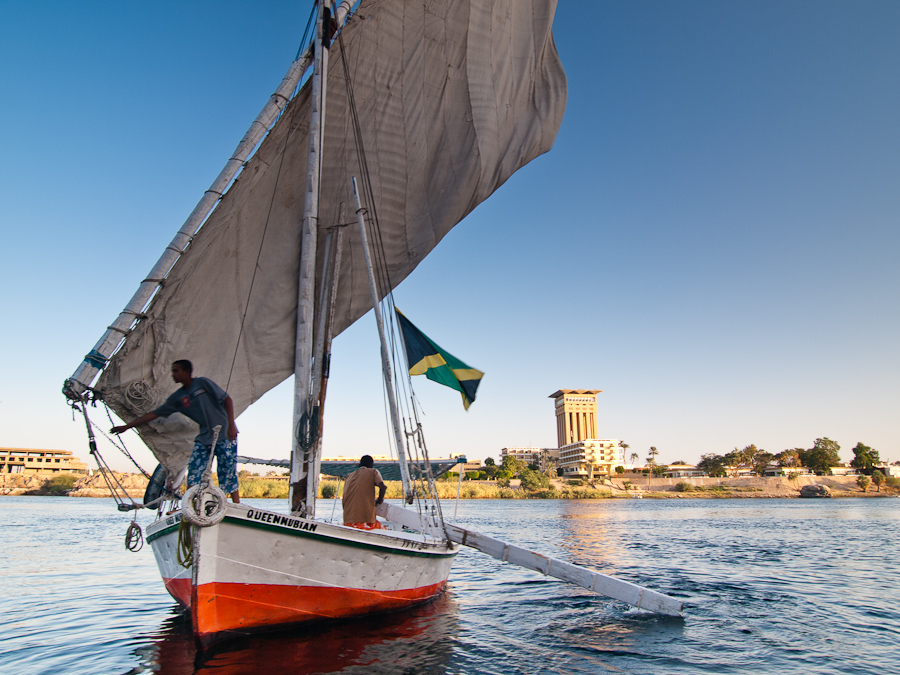 In the evening, he took us for a walk and bought us sugar cane juice. He was a nice, ambitious young man with a strange sense of humour. And he knew his ancient history, which was important since he was our guide.

Aboard the M/S Diamond

Our cruise was known as the Upper Nile Cruise. This is a little confusing as the Upper Nile was actually in the South. But if you think of the Nile as flowing from South to North down to the Mediterranean Sea, it would all make sense.

Over dinner aboard our boat Diamond, F, B and I discussed the problem of tipping - the problem being that we never knew what the right amount to tip was. Dominating our conversations during the entire trip were secret discussions - in the car, on the boat, in the train - about how much to give who.

F needed to send an email but there wasn't wireless internet on the boat. She was considering several elaborate ways of sending the email through, such as re-typing it on her phone (which, as it turned out, did not have internet access anyway), until B suggested an internet cafe. There were several near our boat. As we passed Reception on the way out, various boat staffers asked us if we were from Room 302, which I found strange. B and I left F at the internet cafe. We found a bench in the public square and sat there, people-watching.

B (when we rejoined F): Sharing a moment with the locals.
F: You have a very vivid imagination.

At 3am a bus took us to a holding point where convoys of buses would leave for Abu Simbel at five-minute intervals. The journey was three hours and we were told that the bus would have to come back at a fixed time with the rest of the convoy.

F slept all the way there. Even the bus driver noticed. She would sleep again on the journey back to Aswan and then for two hours in the same afternoon. Throughout the trip, she napped whenever she could. She was sleepy as often as she was hungry.

And she was hungry often. If she happened to be awake during the bus ride, she'd be picking at the bread in the breakfast box. We were always having to tell her to pack something to eat for later, just in case.

F: I have a high metabolic rate.

At Abu Simbel, a new guide told us, "See the temples first, and when you come out, I tell you story." He had a set of UNESCO photographs ready when we came out, which he showed us one at a time while rattling off the main points faster than we could absorb. He was more keen to sell us the pictures than to tell us about the temple.

As drinks on the boat were expensive, B and I went out to buy some bottled water on our return from Abu Simbel. We got a glass of sugar cane juice too. The vendor tried to tell us something about sugar cane and we thought he was teaching us the Arabic word for it. Then he said, "Good for banana," which was when I realised that what he'd been saying all along was "Sugar cane: Egyptian Viagra."

Lunch was good, as were all the meals on the boat. We asked F to pack some oranges for later, in case she got hungry. We lounged on the sun deck after that, and Mahmoud came to talk to us. He explained more about the Egyptian gods. It made things a lot clearer, but it was still confusing. When there are five different gods named Horus, this is not surprising.

Lazing in the sun

Mahmoud then went to sit by the pool with his friend Ahmed, a guide who spoke Spanish. A pair of Japanese girls got out of the pool and joined them. We joked later with Mahmoud about his "Habibi", which could mean sweetheart or dear friend depending on how you said it. We traded more phrases. "Eating rice" is Egyptian slang for sleeping, just as "eating snake" in Hokkien (a Chinese dialect) is Singaporean slang for skiving.

F fell asleep and soon the sun had crept up onto her face. I tried to wake her by calling her name. No response. I put my hat on her face. She did not stir. I said, "F, your boss is calling you." She woke. The boat skimmed along towards a distant bridge as the sun made us say strange things...

B: They build trees to stop the sand going to the Nile.
Me: We are crossing the bridge.

We docked at Kom Ombo, where I enjoyed our evening tour of the Horus and Sobeck temple and Mahmoud's account of its history.

After dinner, where we found ourselves assigned to the same table as the Japanese girls, we went to steal a peek at the Galabrian dance session. It looked interesting at first but quickly descended into disco, and the stage was soon empty, save for a pair of Mexicans showing off.