As I spent most of my time in Dahab diving without an underwater-capable camera, most of the pictures I took were of views from Mount Sinai at various stages of sunrise. 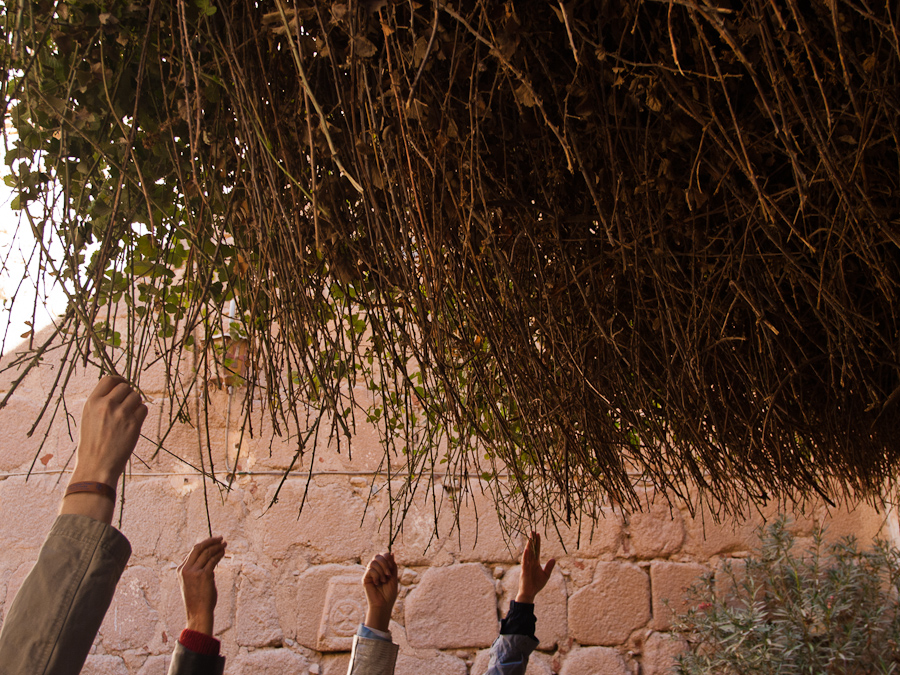 From Sharm el Sheik airport, a road cutting through the mountains took us to Dahab. The drive offered some fantastic rocky views, especially just after La Azhar rest stop with about 20km left to go. Beyond that, more mountains, a gas station, and all of a sudden the sea came into view.

We checked in to Alaska Camp & Hotel. Over Egyptian tea at the brightly-coloured Bedouin-styled open-air communal area (otherwise known as 'The Rugs'), Jackie, the English owner, gave us an introduction to Dahab.

The temperature was a nice 25C, but Jackie found that cold. This is what a few years in Egypt does to you.

I'd not dived for many years so it was great to do it again, and in one of the best dive sites in the world. It didn't disappoint. I went with Sea Dancer Dive Center. Note the American spelling, even though it is Steve, a jolly chap from Kent, who runs it).

Everyone in the dive centre was friendly: Emad, whose first rule of diving was "Slowly-slowly"; Paul (another Brit) with his wry sense of humour (he and Steve make a good comedy duo); Kate, whom we first spoke to and who passed her Dive Master test when we were there; Kjeld the biggest blond in the house.

The Bells and Canyon were great experiences - especially since they were my first deep dives. I had to do my homework - reading late into the night - as part of these 'adventure dives' but it was worth the trouble.

It's impossible to tell you about how great a dive was you haven't done the same dive at the same time, so I'm not going to try here. But during one of our dives at the Lighthouse in Dahab, we came across a giant black stingray that got even Emad excited.

Sea Dancer also conducts 'intro dives': one-to-one sessions where the Dive Master grabs hold of the diver throughout the dive and all the diver needs to do is breathe. B was almost tempted but in the end she was too worried about her mask filling up with water, so she stuck to snorkelling.

As we were walking back to our room after a snorkelling session, the front-of-house from one of the restaurants called after us, "After shower, happy hour!" This was true. In the evenings there was little do to except eat, drink, smoke shisha and shop.

There were many restaurants and many shops. Once again, we were subjected to the 'let me guess where you're from' treatment. The usual hassling went on here too, but generally it was slightly less aggressive than in Luxor. One shop owner even asked how much I'd take for my hoodie! Unfortunately, the best he could offer was to exchange the shirt he was wearing, claiming that his shirt was sexier.

According to B he'd been eyeing my jacket for some time before asking me about it. He said he wanted a sample of the fabric as he wanted to make bags with it.

B: If you come back next year you will see your hoodie selling everywhere.

At the shops, we learnt to bargain better. We started devising lots of little strategies, often after we'd bought something, which I understand to be the wrong way of doing things. But it was difficult to judge the value of things there and each purchase left us wondering whether we had overpaid.

It was the same at the restaurants. You would think that 50LE was a decent price for a foot-long fresh fish - the smallest size on display - with lots of other freebies (five different starters, plus lemon juice and dessert) thrown in. The next restaurant would offer a 20 per cent discount on that. Another one would offer the same thing for 25LE. We ate at one of those, Shark, on the first day. That was before we found out the truth about the seafood in Dahab.

Both Steve and Paul did not eat seafood on principle. Here are the facts as told to us:

We stopped eating at the seafood restaurants after that. You could argue that by us not eating, more fish was going to waste. We weren't going to end the over-fishing overnight, but I reckoned that contributing to the demand wasn't going to solve the problem.

The Thai restaurant Blue House and Indian restaurant Nirvana were recommended alternatives. I'm happy to confirm that both were great places to eat. We also spent a great deal of time in Yalla and Friends drinking copious amounts of guava and mango juice, and shai koshary.

Jackie had warned us that the quality of the Bedouin guide for the Mount Sinai climb was a bit of a hit-and-miss affair. The one we had named our group Koko. He would call out, "Koko-ko-ko!" from time to time to make sure we were following him. About five minutes into our walk, he asked if any of us had a light. He didn't have one on him, but I suppose he didn't need one.

Fortunately, we had at least three torches in our group of eight (a couple from London, an Australian couple, the two of us, a Russian lady and a Californian named Mike). There were many tea stops along the way but nobody in our group was interested in buying anything. Everyone was so well prepared that we didn't even need to rent the blankets at the summit. Needless to say, the guide didn't make any money out of us.

We sat in the cold waiting for the sun to appear. The sky turned from black to blue and a band of red and orange and yellow began to widen. As the top of the sun poked through the mountains, there were gasps of acknowledgement, followed by a collective hush. Various groups of Christians, in several languages, then started singing.