Having just arrived from friendly Budapest we were a little unprepared for the reception we received at the Blue Hostel in Vienna. A dour Chinese-looking woman sat in the dark lobby. We thought we'd better ask about payment first as we didn't have enough Euros on us. 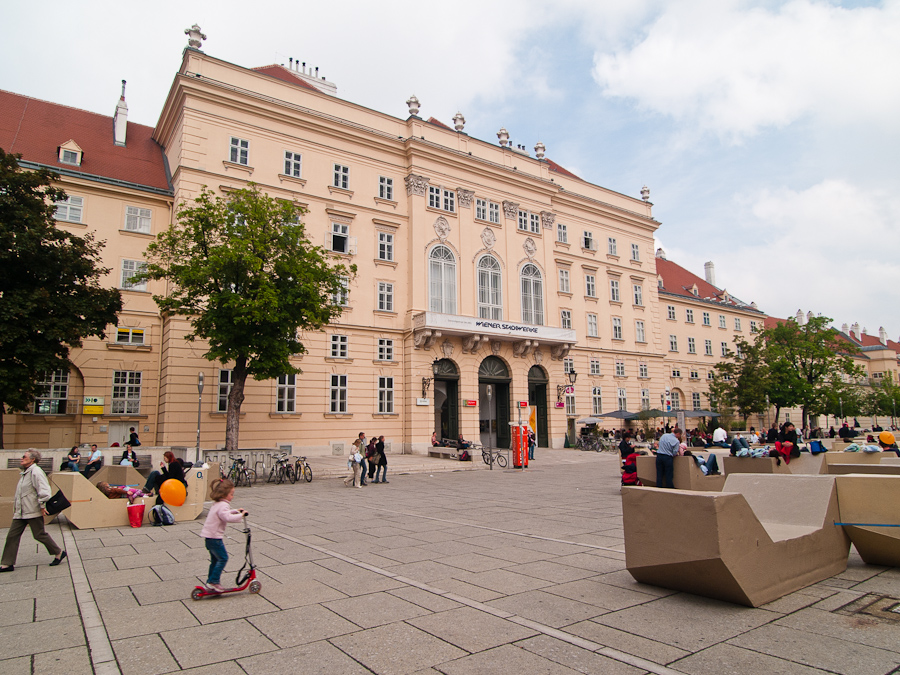 B: Is it all right if we pay tonight? We need to get Euros.
The woman: You know you are coming to Vienna, you know you have to pay when you arrive. And you didn't change Euros before you come.

After some begging we were allowed to go to the bank on the condition that we left our bags as collateral. The manager looked a little happier when we came back with the money. "You are lucky, the bank hasn't closed," she said.

She then gave us a sheet of rules, which we had to sign. This contained various 'fines' for every situation you could think of, including:

On top of that, 'management' reserved the right to charge your credit card for any damages.

We paid up. The bill was €172.08 but she didn't have change so she said I could pay the eight cents later. When I dropped by later to give her ten cents, she was in the middle of lecturing a new guest who had just arrived. The manager said, "No need," but only after pocketing my money.

Apparently the new guest was half an hour too early.

Not visiting museums at the museum quarter

In the morning, we took a short tour of the palace at Belvedere in the rain. At the Franz Josef Banhoff (train station), we asked about tickets to Melk and Krem, and made the operator print more timetables than we really needed.

We spent the rest of the day in the museum quarter, which was quite near our hostel. At a cafe, we took our time to eat and watched a little girl play with her tagliatelle. We ambled around the public square. Took pictures. Rested on one of the benches that were modelled after cardboard boxes. Took more pictures. Sat by a pool of water in front of Leopold Museum. Debated whether to visit any of the museums. I wanted to check out the Architecture Museum but B said that it was all pictures and drawings inside. So we went to look at the Modern Art Museum. Didn't go in. Sat around a bit more enjoying the sun when the clouds parted, which was seldom. B tried watching out for people vacating their 'cardboard' benches so she could get one for ourselves but always someone beat her to it.

Before dinner, at the Imervoll, we walked through Hofburg Palace and stumbled upon a carnival. Children were having a field day, with balloons flying everywhere. An orchestra was playing outdoors and people were standing or sitting around watching, despite a light drizzle. It was nice except that people with balloons kept coming to stand right in front of me, blocking my view. The rain got heavier and everyone went to hide under a sheltered passageway, leaving the orchestra to play to an almost empty square.

Back in the horrible hostel, I thought the shower was bad, but for B, it was "the mother of all intermittent showers". She wasn't referring to the pressure but the temperature. "One moment I'm scalded, one moment I'm frozen," she said.

Deciding where to go

Before heading out to the Parliament building we ate at Centimeter cafe. The food portions were huge. We walked up to the Rathaus (City Hall), loitered in a park as we decided what to do next, and without knowing it came to Dr Karl Renner Street, where several shiny new-series Mercedes were lined up on display. Eventually we agreed to visit Schoenbrunn Palace.

What transpired next was the following conversation between us. Bear in mind that we'd already spent a good part of the afternoon discussing where to go.

After she consulted the map...

B: Okay we take the U-Bahn.
Me: Okay.
B: Wait, let me see if there's another tram we can take.

Schoenbrunn - we eventually went by U-Bahn - was massive. There were several tours to choose from: Grand Tour, Classic Tour, you get the idea. You could also buy individual tickets to each section of the palace. We decided to do that as we didn't have a lot of time.

We paid €2 each to visit the garden. The flowers looked as if they'd just been stuck in the ground and hadn't had time to grow. We climbed up to the Gloriette and took a million pictures. We sat and people-watched. Runners. A father pulling his son up in a cart. A large man in short shorts and no top on running up and down. 'Ironman', as we called him, finally settled on a grass patch right in front of us, performing hip rotations.

B: What are we waiting for?
Me: The sun to set.

We waited and people-watched and took two million more pictures.

B: It just occurred to me that you have to pick your bag up before 6pm.
Me: What time is it?
B: 7pm.

We ran down to the palace building. Everything was closed. A man was smoking by the main entrance.

B: Our bags are still inside.
The man: Come back tomorrow, go through the kids' door, first door on your left.
B: What time do you open?
The man: 8.30.
B: Okay. Danke shoen.

The man spoke into his walkie-talkie, and the walkie-talkie responded, "Okay." The man asked us to follow him.

Hurray! I got my bag!

B: Now you've seen all of Vienna.

I'm sure I hadn't but it did feel as if I had. Apart from the hostel experience, it's all been rather civilised and pleasant.